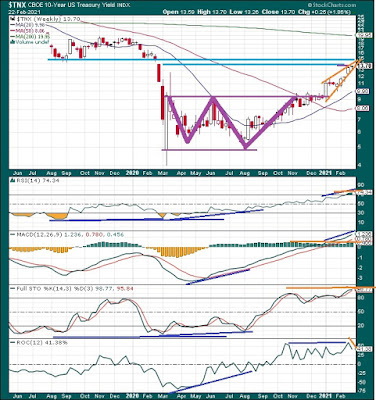 The TNX 10-year Treasury yield chart has been of interest over the last 2 weeks. It is illustrative of why you have to wait for all the indicators to negatively diverge to call a top, or, all the indicators to positively diverge to call a bottom. Remember, the MACD line remained long and strong (blue line) so the top is not in on the weekly basis until she goes neggie d.

The green and red colors are not used for the indicators since bonds are not like stocks. Yield moves inverse to price. So the TNX chart, which is yield, going up and up and up, means traders are selling, selling, selling, price is dropping, yield is rising. Thus, red and green are misleading so blue and orange ought to confuse the matter nicely.

The overbot conditions and rising wedge is negative for yields. Ditto the neggie d shown by the histogram and ROC. This requires yield to pull back a bit and take a breather. However, you know the drill by now. Yield will want to come back up again on the weekly basis and likely tease into that gap because the MACD and RSI still have some fuel in the tank.

A stock market selloff is expected as all of Keystone's charts have been describing the last couple weeks and this may occur with the dollar spiking wildly higher and gold dropping. A flight to safety would occur so the 10-year Treasury will see rising prices and lower yields during a stock market selloff. That would surprise everyone since 99.9% of Wall Street says inflation is here and yields will only go up.

The TNX monthly chart is up, up and away for yields on the long term basis but there is business to take care of in the coming weeks. Taking a look at the daily, it is neggie d except for the MACD so yield should top out after a jog move (down-up). TNX likely drops today, then back up tomorrow, which will be the high in yield on the daily basis (make sure by watching the MACD go neggie d). The neggie d parameters on the weekly join forces with the daily to send yields lower say from say, a hump day top into next week.

But, remember, that weekly chart above wants yields to come up again because of the MACD and RSI, so yield will come back up on the weekly basis and if the two indicators turn neggie d, the top is in for yield on a multi-week basis (it should occur soon in a week, or two, or three, you have to watch the chart, it will tell you when).

Pope Powell appears before the Senate Banking Committee in about 3 hours and tomorrow he will testify before the House Financial Services Committee. This morning is the key discussion since he repeats the same schpeal tomorrow. Powell's words will impact the dollar, Treasuries and stocks so this drama will take place, say, between 8 AM EST and noon. Powell's statement may be released any minute.

Pulling time frames out of thin air, say yield tops out at 1.37%-1.43% over the next 2 days. Then down into next week. Then back up the week after that for the potential top in yield, on a weekly basis, during the week of 3/8/21. If only the RSI goes neggie d and the MACD remains stubborn, another jog (down-up) will be needed which is another week or two.

Thus, yields top out now and slump a few days, but then come back up and likely play in the 1.4%-1.5% range during the week of 3/1 or 3/8. Yield tops out in this range sometime between say 3/8/21 and 3/26/21 and then yield will drop for several weeks. At that bottom in yield, say out in late March or April some time, the 4-decade bond rally is officially over. Yields head higher from April on for many months and likely years forward.

Keystone is not playing in this arena right now; remember TLT and TBT are plays but you have to be nimble. TLT is pummeled, beaten like a rented mule. Simply watch the set-up described and the TLT long, or TBT short, can be played during the coming multi-week drop in yields (wait for the neggie d to be placed on the weekly chart above so you know the top is in for yields). But from April-May on, as yields bottom and then begin a long move higher, TLT short and TBT long would be the play for many months forward into year end and likely into 2022.

Traders will likely discover that yields are not going to go straight up from here, at least that is what the charts say right now. The MACD on the weekly chart will tell you when the top is in for yields which is anytime over next couple weeks. This information is for educational and entertainment purposes only. Do not invest based on anything you read or view here. Consult your financial advisor before making any investment decision.

Posted by Keystone Speculator at 5:28 AM

"Simply the Best Technical Analysis on the Web"

Keybot the Quant
The Keystone Speculator
Keystone the Scribe

Do not invest based on anything you view or read on this blog. This blog is for educational and entertainment purposes only. Consult your financial advisor before making any investment decision. Please read the Terms and Conditions.

President Trump's Final 80 Days The 80-day period between the US 2020 presidential election and the inauguration is the most extraordin... 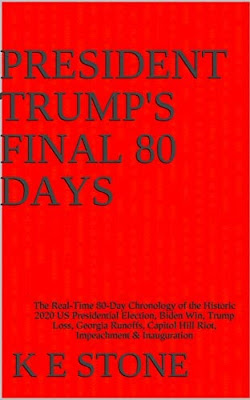